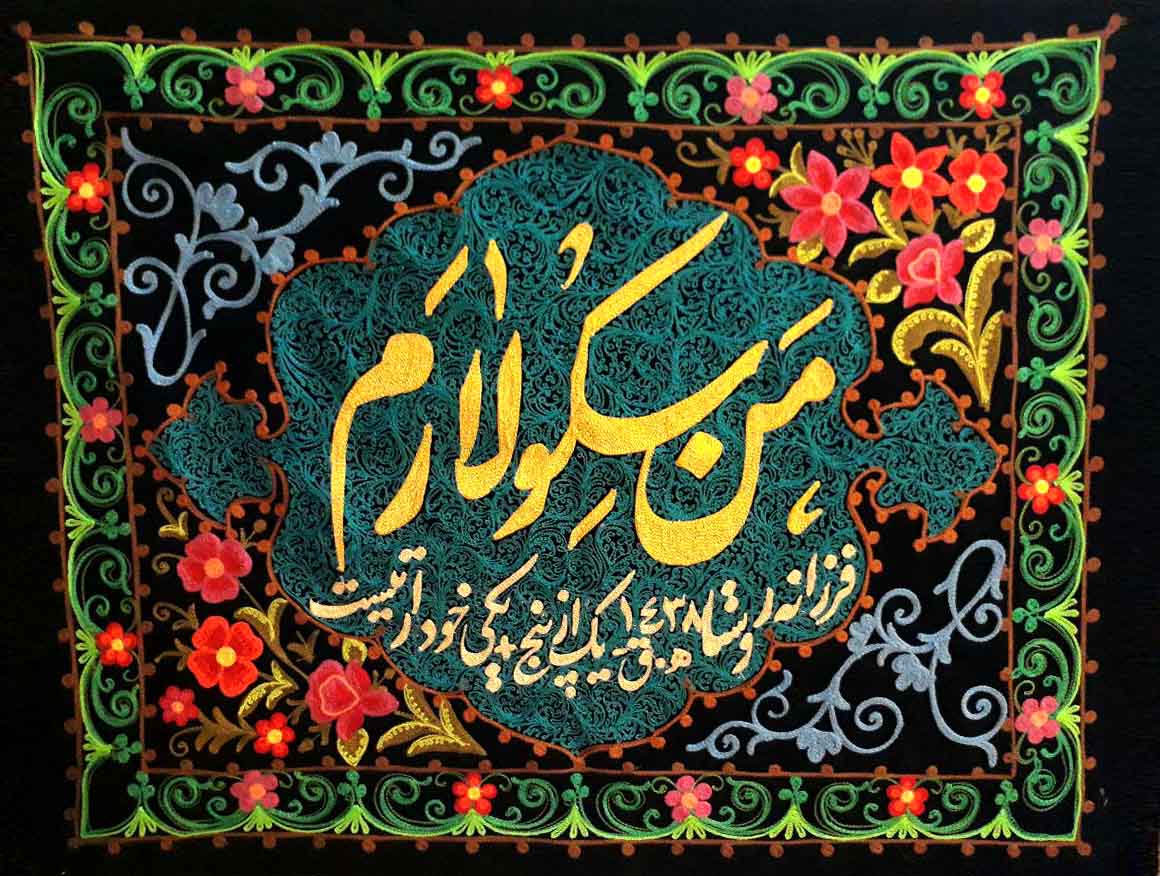 We can compare the self-taught artists’ works to the stones and rocks which have been created and formed from the melting magmas of an erupted volcano cooled and hardened. Volcano of sheer creativity, necessity, or pain that led to an explosion in the soul of the artist. The stones made in such a process are authentic, pure, rough and in comparison to the designed jewelry naïve. Farzaneh Rosta’s works have such qualities at first glance; we can easily recognize her bravery and courage; she draws seemingly meaningless lines, she writes unreadable poems, she repeats a word or a phrase hundreds of times or she chooses poems with lots of repetitions, like a prayer in hardship or a mother who sings a lullaby for her child; it seems as if she’s suffering from something unspeakable that led to such audacious explosions on the white paper. But through such simple, truthful, intimate and brave lines suddenly we can trace the intellectual aspect of her works that is unprecedented in the practices of self-taught artists. Working in her ivory tower, avoiding to join artists’ circles, but yet following and interestingly observing the current modes and discourses of Iranian contemporary art enables her to response ingeniously through her own bold language. Her first exhibition abroad, in the city of Berlin, announces her bright upcoming days although this volcano became active late and unexpectedly.

Farzaneh Rosta (b. 1956 Iran) is a self-taught artist whose works are inspired by the Iranian art school of Saqqakhane stablished by well-known artists like Charls Hossen Zendehroudi or Parviz Tanavoli before Islamic revolution in 1979. Farzaneh Rosta intuitively combines the folkloric prayer songs, religious verses and traditional lyrics in a creative written form. Rosta’s works cannot easily be regarded as calligraphy or graphic design although she uses lots of words and texts in her practice. Having started her career in her late 40s, she explains the main motif to start art was the illness of her younger daughter who is suffering from incurable Epilepsy and her permanent need for support, care and attention. She dreams and prays in her works although he call not herself a beliver, sometimes she struggles with the holy God, the other time she requests healing from him. On the other hand, many of her works are reactionary to the current modes and discourses of Iranian contemporary art. Beside holding many group exhibitions, she has the experience of 3 solo exhibitions in Art Gallery of Sari and  Raf in Tehran. Her works have been collected in collections like Farjam in Singapour or Khorram in Dubai. Farzaneh Rosta will have her first solo exhibition abroad in the gallery of Erstererster Berlin.

The Exhibition has been made possible through kind support of Kunsthochschule Weissensee and German Embassy in Tehran.

Many thanks go to Mr. Benedikt Gnadt who patiently helped us toward the realization of this project. Amir Moghtada has designed the poster of the exhibition. Other exhibition colleagues: Sadaf Vasaei, Reza Seyfi, Abdollah Heidari, Mobasher Niqui, Niloufar Ebadi, Saeedeh Paknemat, Sara Esmaeilzadeh, Kamran Pakbaz.