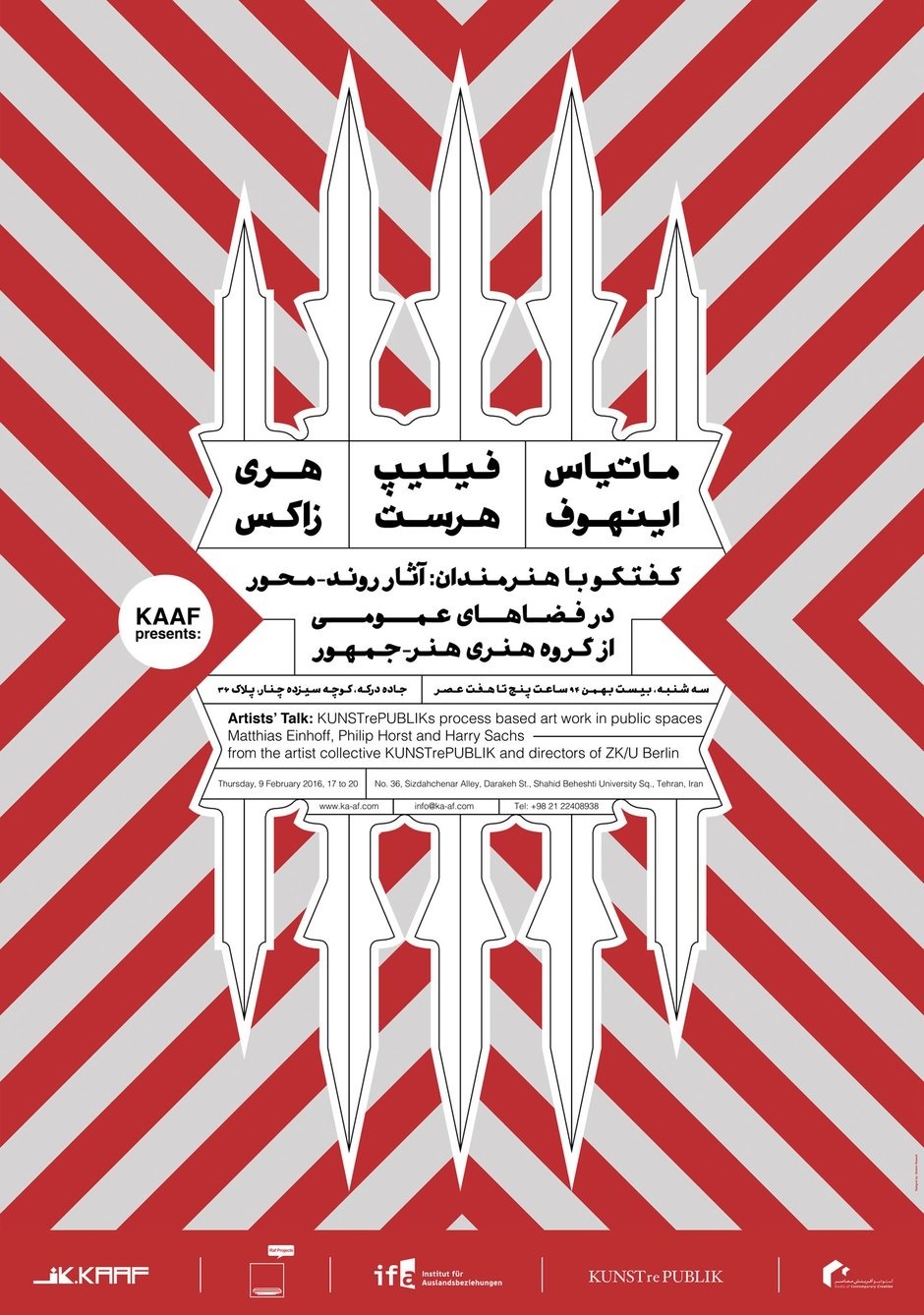 KUNSTrePUBLIK is a registered non-profit oganization and artist collective founded in 2006.

The group’s formation was precipitated by their initial project, www.skulpturenpark.org Skulpturenpark Berlin_Zentrum, a non-traditional exhibition venue on 62 vacant lots of downtown real estate, on what was formerly the “death strip” within the Berlin Wall. Since 2006, the group has conceived and realized many site-specific exhibitions, which have pulled from their extensive research of the site’s history and its present in-between status. Through their activities in the park, the group’s members have gone on to engage in other constellations and community-based activities, including education, urban planning, art making and curation.

The group has also hosted universities and traveled to other nations to conduct workshops for alternative and subversive strategies in public art.

The organization relies on private donations, specific project grants, and collaborations with other institutions in order to fund its program. The members of KUNSTrePUBLIK continue to work both collaboratively and independently, as artists, curators, educators, organizers and urban planners, as each invitation, site or situation demands.

In July 2012 KUNSTrePUBLIK opened the Centre for Arts and Urbanistics (ZK/U) in Berlin Moabit.

The ZK/U sees itself as a laboratory for inter- and trans-disciplinary, activities centered on the phenomenon of “the city”. ZK/U promotes international exchange on global issues, in the light of what is happening in one’s own backyard. Working with local and international partners, ZK/U residencies brings together critical minds at the cutting-edge of artistic production and urban research.

How did you experience Teheran?
How did you find KAAF-institut, how was your collaboration and residency there?

During our first stay to Teheran, we were hosted by KAAF-Institutd. Our trip was aiming at creating first contacts and exploring the city.
KAAF-Institute was an amazing host and guide through those different visible and invisible layers of the city. We experienced the cultural diversity, the various political dimensions of public space and individuals, telling their personal story. It was a great and enriching starting point for debate and the work, that we are planning to develop from our gathered knowledge and inspiration.
The stay in our residency in the northern hills of Teheran was very comfortable and, despite the coldness of the winter, warm and welcoming.
Our host helped us with logistics and travel and solved every problem within NO TIME. Our presentation and discussion at the institute was well planned, promoted and attended. We were able to get in touch with interesting cultural and social personalities and exchange thoughts and ideas.


The artist collective KUNSTrePUBLIK has been working in the public sphere for more than 10 years. Through tangible projects they have been exploring the potentials and limitations of art for citizens to freely express or to be represented by the action and physical outcome of KUNSTrePUBLIK’s work.
KUNSTrePUBLIK’S approach is driven by the site and crosses architectural, artistic and political means of creating projects:
KUNSTrePUBLIK has been creating an oracle that allows citizens to anonymously pose and answer unwanted and otherwise censored questions in Uljanovsk, Russia, it has build a mobile ‚protest-fountain‘ in Washington D.C., it created a huge advertising cube for unrepresented vendors in a market district of Jakarta and created an opera in burned cars, to withstand upcoming gentrification.
KUNSTrePUBLIK’s approach includes curatorial work to capture a broader social picture: the collective has initiated ‚Archipel Invest‘ - a series of projects to outline micro-economical futures of the post-industrial Ruhr-area, it was running the ‚Skulpturenpark Berlin_Zentrum‘, an inner-city wasteland, that served as a venue for discussing urban dynamics with subversive means and has created a series of projects named ‚Angst in Form‘ revealing human fears in Halle/Saale.
KUNSTrePUBLIK is the organization behind ZK/U - Center for Arts and Urbanistics - exploring urban communication structures and implementing experiments and projects that foster the conversation between diverse stakeholders in the urban arena.
The ZK/U is located in a neighborhood with various conflicts, that are due to the polarity of backgrounds: more established ‘middle-class’ citizens, precarious 1st and 2nd generation migrants and newly arriving groups of refugees. Therefor ZK/U particularly aims at (re)activating the social and spatial relationship between individuals and groups, that are divided by differences of education, income, gender and ethnic background.
KUNSTrePUBLIK is a founding member of the initiative ‚Haus der Statistik‘, which aims at activating an abandoned building in the centre of Berlin, to be used for integration of artists, refugees and social initiatives.